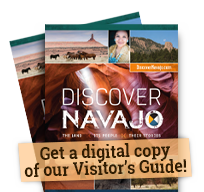 (08/12/21) There is a MASK MANDATE on the Navajo Nation. Please wear a mask when visiting — indoors and outdoors in all public spaces. https://bit.ly/3k3YxaY

Centuries before Christopher Columbus landed in the Americas in 1491, Navajos were already settled in the Four Corners area of the Colorado Plateau. However, Navajos weren’t the first inhabitants of the land. According to Anthropologists & historians, Ice-Age Paleo-Indian hunters (12,000-6,000 B.C.) roamed the Monument Valley area thousands of years earlier, followed by archaic hunter gatherers (6,000 B.C-1 A.D.). Evidence of Anasazi in Monument Valley is still visible through their sites and ruins dating before 1300 A.D. But it wasn’t until 1581 that the first Spaniards made contact with the Navajo.
From the cultural perspective, Navajos believe they came to their land by emerging through four levels of worlds, to currently residing in the fourth level, the “Glittering World”.
Welcome to a place where history comes alive. Welcome to the Navajo Nation. 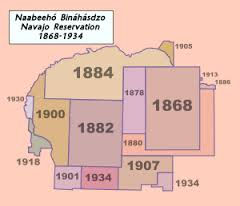 The Long Walk of the Navajos is a prominent history in Navajo life because it officially established Navajoland upon the release of the Navajos from Bosque Redondo, New Mexico where they were incarcerated in January 1864. Navajo were forcefully removed from their land due to continued conflict with settlers moving on and surrounding their land. The map on the right shows the original land base with addition to the land base through Executive Order.

For more information on the Long Walk, contact the Navajo Nation Museum at

Information can also be found here: 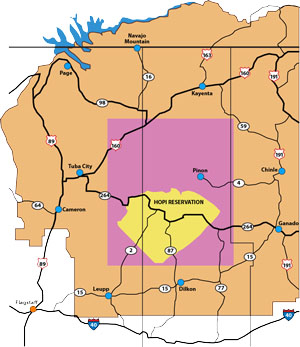 Diné Bikéyah (pronounced as Din’eh Bi’KAY’ah), or Navajoland is unique because the people here have achieved something quite rare: the ability of an indigenous people to blend both traditional and modern ways of life. The Navajo Nation truly is a nation within a nation. In years past, Navajoland often appeared to be little more than a desolate section of the Southwest, but yet is a mixture of arid deserts and alpine forests with high plateaus, mesas and mountains. The discovery of oil on Navajoland in the early 1920’s promoted the need for a more systematic form of government, when the Navajo Nation became known as a wealthy nation in a world of its own. In 1923, a tribal government was established to help meet the increasing desires of American oil companies to lease Navajoland for exploration. Navajo government has evolved into the largest and most sophisticated form of American Indian government.

The current Navajo land base map extends into Arizona, New Mexico, and parts of Utah is noted on the right. The yellow area is the original Hopi land, but an addition was made, highlighted in pink. Navajos lost some land base resulting in Navajo people living in the area to be relocated off Hopi land. 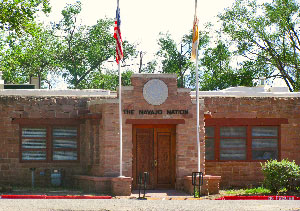 The origin of the Navajo Government goes back to 1923, when the first Navajo Tribal Council was established. However, it was not until 1938 when the very first election took place. Since then through 1989, the Navajo Nation government consisted of the tribal council headed by the Chairman of the Council. In December 1989, Title 2 Amendment were passed, which established a three-branch system of government, comparable to the major democracies of the world: The Executive Branch; The Judicial Branch; and The Legislative Branch. 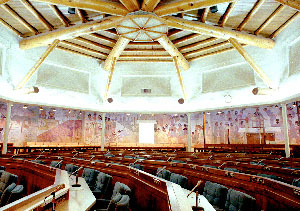 In the early 1930s, Window Rock, AZ was chosen as the capital of the Navajo Nation by John Collier, the Commissioner of Indian Affairs at the time. Not only was Window Rock a unique and beautiful sandstone formation, it was also just one day’s ride by horseback to the nearest railroad 30 miles southeast in Gallup, NM. 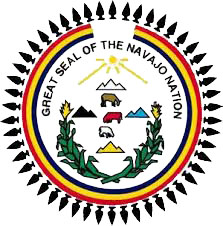 The Great Seal of the Navajo Nation was designed by Mr. John C. Claw Jr. of Many Farms, AZ. This was officially adopted by the Navajo Tribal Council on January 18, 1952.

The Great Seal has fifty projectile points or arrowheads symbolizing the Navajo Nation’s protection within the fifty states. The opening at the top of the three concentric lines is considered the East. The lines represent the rainbow and sovereignty of the Navajo Nation. The rainbow never closes on the Nation’s sovereignty. The outside line is red, the middle line is yellow and the inside line is blue. The yellow sun shines from the east on the four sacred mountains; Mount Blanca (Sis Naajiní’ – Dawn or White Shell Mountain), Mount Taylor (Tsoodził – Blue Bead or Turquoise Mountain), San Francisco Peak (Dook’o’oosłííd – Abalone Shell Mountain), and Mount Hesperus (Dibé​ Nitsaa – Big Mountain Sheep or Obsidian Mountain). 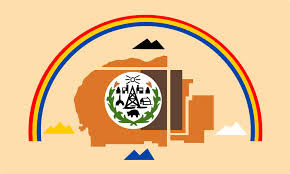 The Navajo Nation Flag was designed by Jay R. DeGroat of Mariano Lake, NM and adopted by Navajo Tribal Council on May 21,1968. The flag incorporates several elements from the Navajo Nation Seal.

The Navajo Nation flag has a pale buff color background, bearing a map of the Navajo Nation in the center. The original area of the 1868 reservation is dark brown, while the much larger current borders are copper.

Surrounding the map are the four sacred mountains in each cardinal direction: black (representing the north), turquoise (representing the south), white (representing the east), and yellow (representing the west). These four colors form a recurring theme in the legends of the Navajo, beginning with the Navajo creation story. In it, the world began as a black island floating in the mist. Above it were four clouds: black, white, blue (meaning turquoise), and yellow. The story describes the colored clouds as successive worlds and narrates the themes of birth, propagation, flood, escape, and continuing life. Arching over the mountains and map is the rainbow of red, yellow, and blue, with red outermost in reverse sequence from the Navajo Nation seal. The rainbow symbolizes Navajo sovereignty. 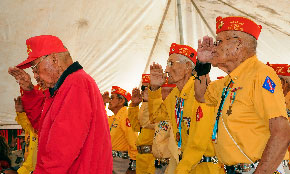 The Navajo Code Talker’s served in all six Marine divisions from 1942 to 1945 and have been credited with saving countless lives.

The Navajo Code Talker’s primary job was to transmit information on tactics, orders and other vital battlefield information via telegraphs and radios in the Diné language.

The method of using Morse code often took hours whereas, the Navajos handled a message in minutes. It has been said that if it was not for the Navajo Code Talker’s, the Marines would have never taken Iwo Jima.

The Navajo’s unwritten language was understood by fewer than 30 non-Navajos at the time of WWII. The size and complexity of the language made the code extremely difficult to comprehend, much less decipher. It was not until 1968 that the code became declassified by the US Government.